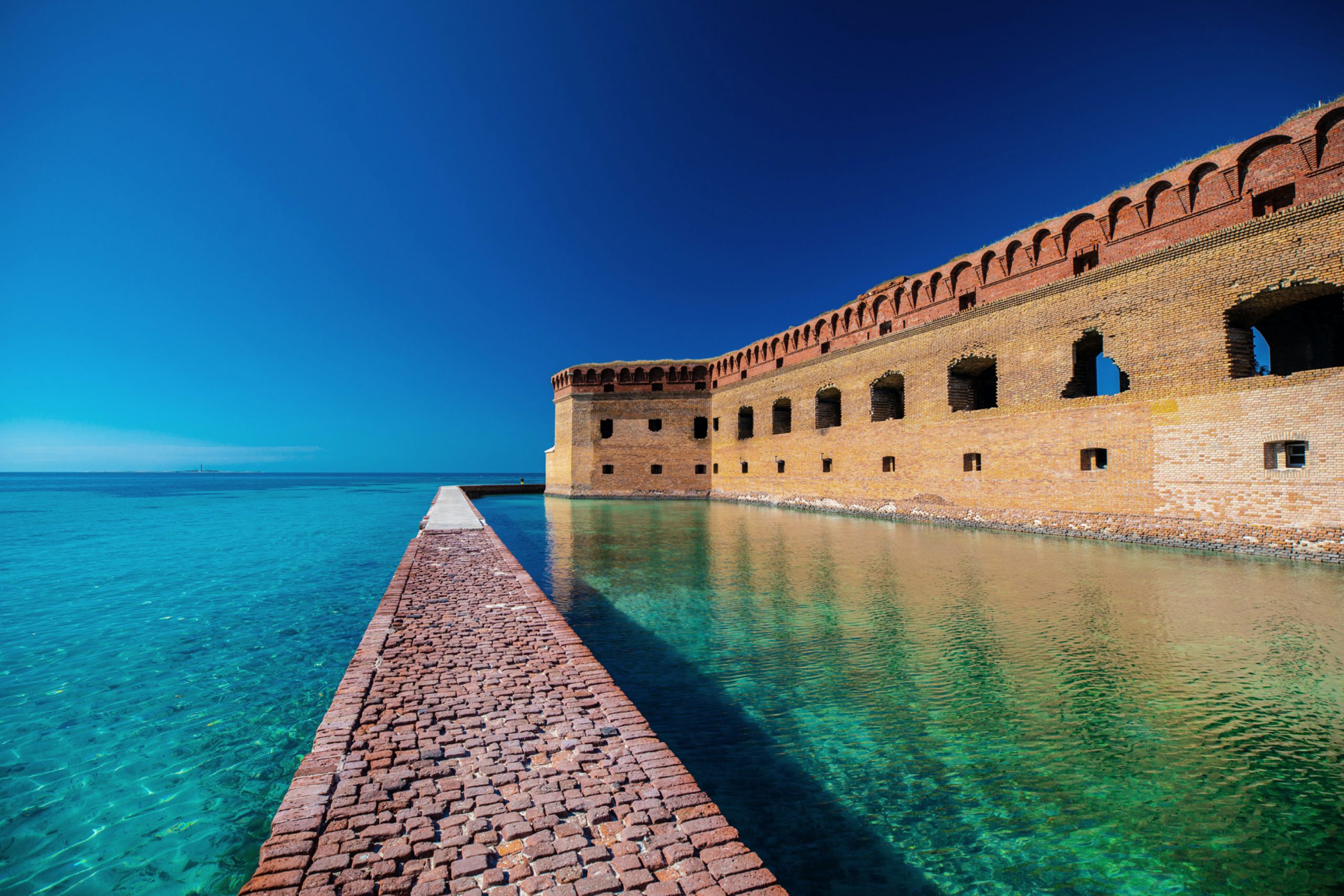 Want to Visit Dry Tortugas?
Our national parks have many recreational activities and opportunities just waiting for you. Check nps.gov for the latest information on its current offerings!
Plan Your Visit

Rallying for the protection and preservation of one of our country’s most remote national parks, we know that some of the greatest natural resources are the hardest – but most necessary – to reach.

Although 70 miles from Florida’s famed Key West, a desolate destination Dry Tortugas National Park is not!

This collection of seven keys is a prized paradise amongst locals and adventurous tourists alike. Housed within the islands is Fort Jefferson, the largest all-masonry fort in the United States, which began construction in 1846 to protect the nation’s gateway to the Gulf of Mexico. Several other safeguarding structures soon followed, including a lighthouse at Garden Key and a lighthouse on Loggerhead Key.

Those constructions may still be standing, but the islands of Dry Tortugas are in a constant state of change, subject to the influences of marine, atmospheric and terrestrial environmental processes. Geology, tides, currents, water, air quality, weather, climate, noise, light pollution and the actions of humans are just a few of the many natural and human factors that have shaped the development of land and waterscapes in Dry Tortugas.

One of the most drawing attractions of Dry Tortugas National Park is its namesake turtles (tortugas is Spanish for turtles). Five species of sea turtle are found in the waters of South Florida: loggerhead, green turtle, leatherback, Kemp’s ridley and hawksbill. All five species are now listed as either threatened or endangered under the Endangered Species Act of 1973. But probably the most abundant opportunity to observe wildlife comes from the nearly 300 species of birds around the park, the majority of which are migratory.

For those that fancy flora over fauna, of the 125 plant species reported in Dry Tortugas National Park, 81 species (65% of the total) are of exotic origin, the result of accidental and deliberate introduction by humans during the past century. Below the surface, the park’s seagrass and coral communities are among the most vibrant in the Florida Keys.

For almost two centuries, Dry Tortugas has provided protection for the human inhabitants of our country and their interests. Now it’s time for us to return the favor.

Rangers conduct pre-trip classroom lessons providing an overview of the National Park Service, with an educational field trip that follows, which provides experiential hands-on learning opportunities for the participating students.

In 2019, Dry Tortugas provided programming for seven local middle schools, totaling 175 students and teachers, with the support of The Alliance. The program has plans to only get bigger from there!

Did you know? The beaches at Dry Tortugas have the highest nesting density of turtles in Florida and account for 94% of all nesting activity in Monroe County!

Sea turtle nesting at Dry Tortugas is extremely intense. At least 10-20 turtles attempt to nest per day per key during peak season. Because of this density, beaches need to be observed on a daily basis to distinguish between false crawls and true nesting activity. The park estimates that it is missing anywhere from 100 to 400 nests per year due to insufficient observations.

In 2021, our support will help provide the staffing to better monitor sea turtle nesting season, which will allow the park to quantify the number of sea turtle nests over time; to assess whether or not the removal of Australian pine roots improved the nesting success on Loggerhead Key; to identify locations that may need additional protection from visitors; to determine nest incubation temperatures and estimate hatchling sex ratios; and to establish a coastal erosion monitoring protocol.

The benefit of this project to park resources, visitor safety, and the visitor experience will be immediately noticeable.

For over 27 years, nurse sharks have been studied in Dry Tortugas National Park to monitor individual behaviors and document population dynamics.

“Refuging” is a unique characteristic of some female courtship behavior that was discovered within Dry Tortugas and this phenomenon allows observation, interaction and research on otherwise obscure shark mating rituals in the clear, shallow waters surrounding the islands.

Through this program adults and juvenile nurse sharks are tagged, so we can continue to learn about nurse shark reproductive habitat use, courtship, female refuging, male competition and cooperation.

These studies have started to illuminate research questions and have brought new patterns and paradigms of shark reproductive dynamics to elasmobranch science.

The coral reefs and beaches at Dry Tortugas National Park are littered with derelict lobster and crab traps, rope and other debris.

This debris harms seabirds, sea turtles and reef resources by crushing, breaking, smothering reef structures and organisms; obstructing nesting habitat; and interfering with foraging. Injuries to beaches and reef are exacerbated during storms and hurricanes when debris is moved around the beaches and reef.

The objective of this clean-up project is to remove abandoned traps, trap fragments and marine debris from Dry Tortugas’ reefs and beaches prior to the annual arrival of sooty and noddy terns; the start of sea turtle nesting season; and before the fall King Tides, which pull shoreline debris back into the ocean from high up on the park’s beaches.

During calm weather when transit to the park is much easier, Dry Tortugas sees a spike in visitorship.

The spike is manifested in the number of boats at the park, the number of campers on Garden Key and the number of observed violations of the park’s standard regulations, as well as of its special regulations for its Research Natural Area and other areas closed to boating.

During these peak visitation periods, Dry Tortugas requires an increased capacity to protect critical park resources.  This project would provide supplementary law enforcement services to better monitor this influx of visitors and to better conserve the land and waterscape of the park. 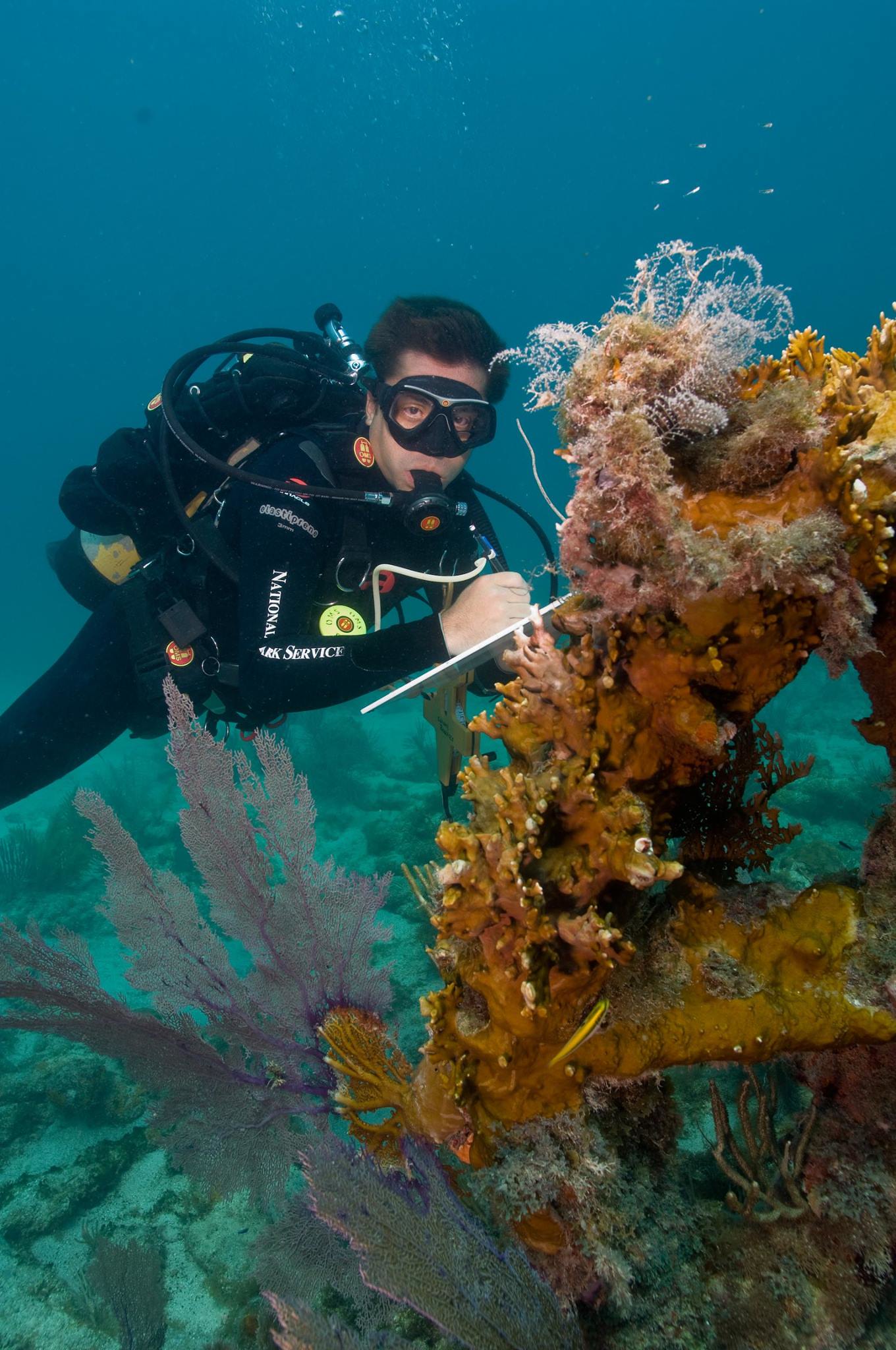 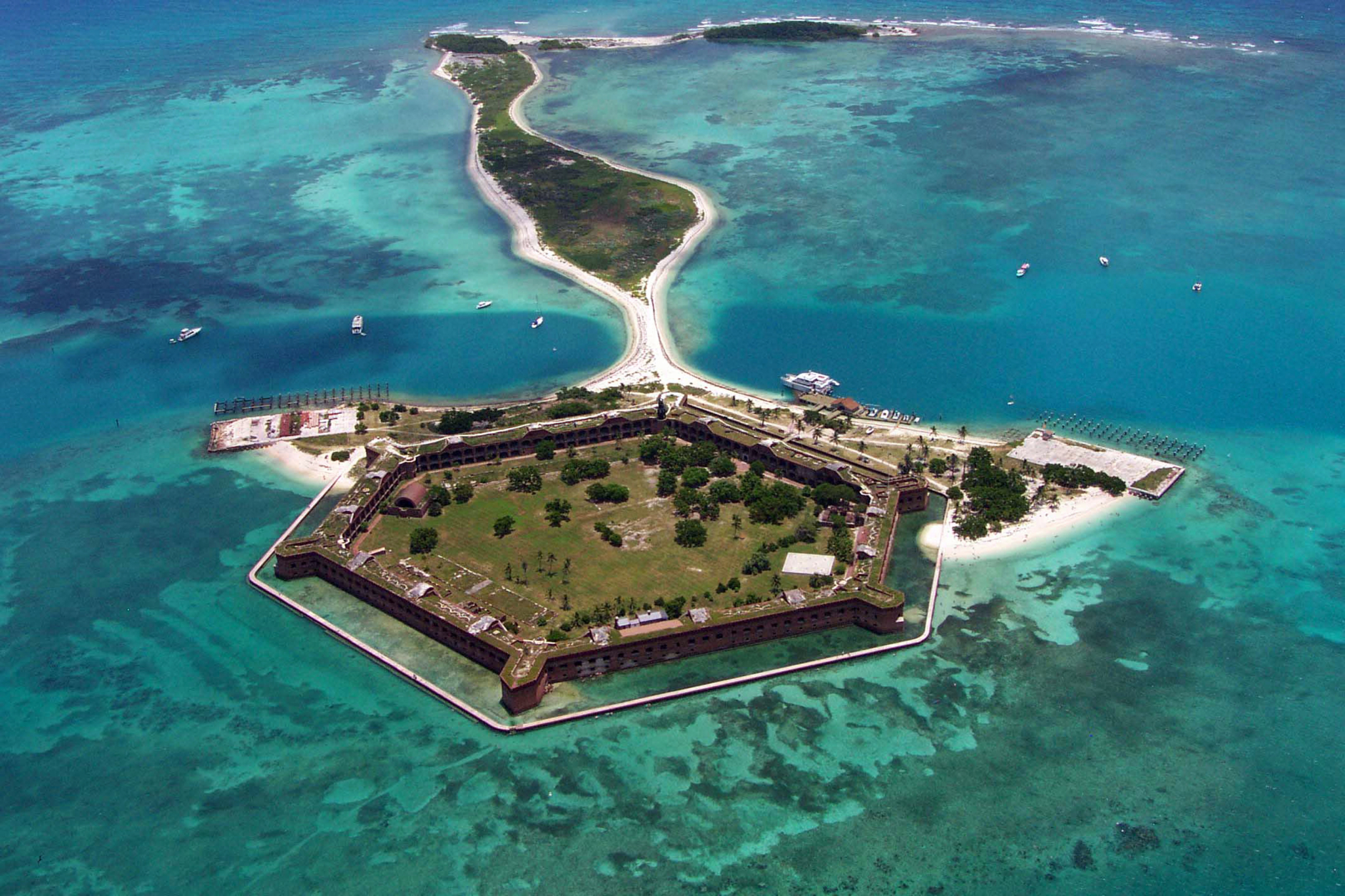 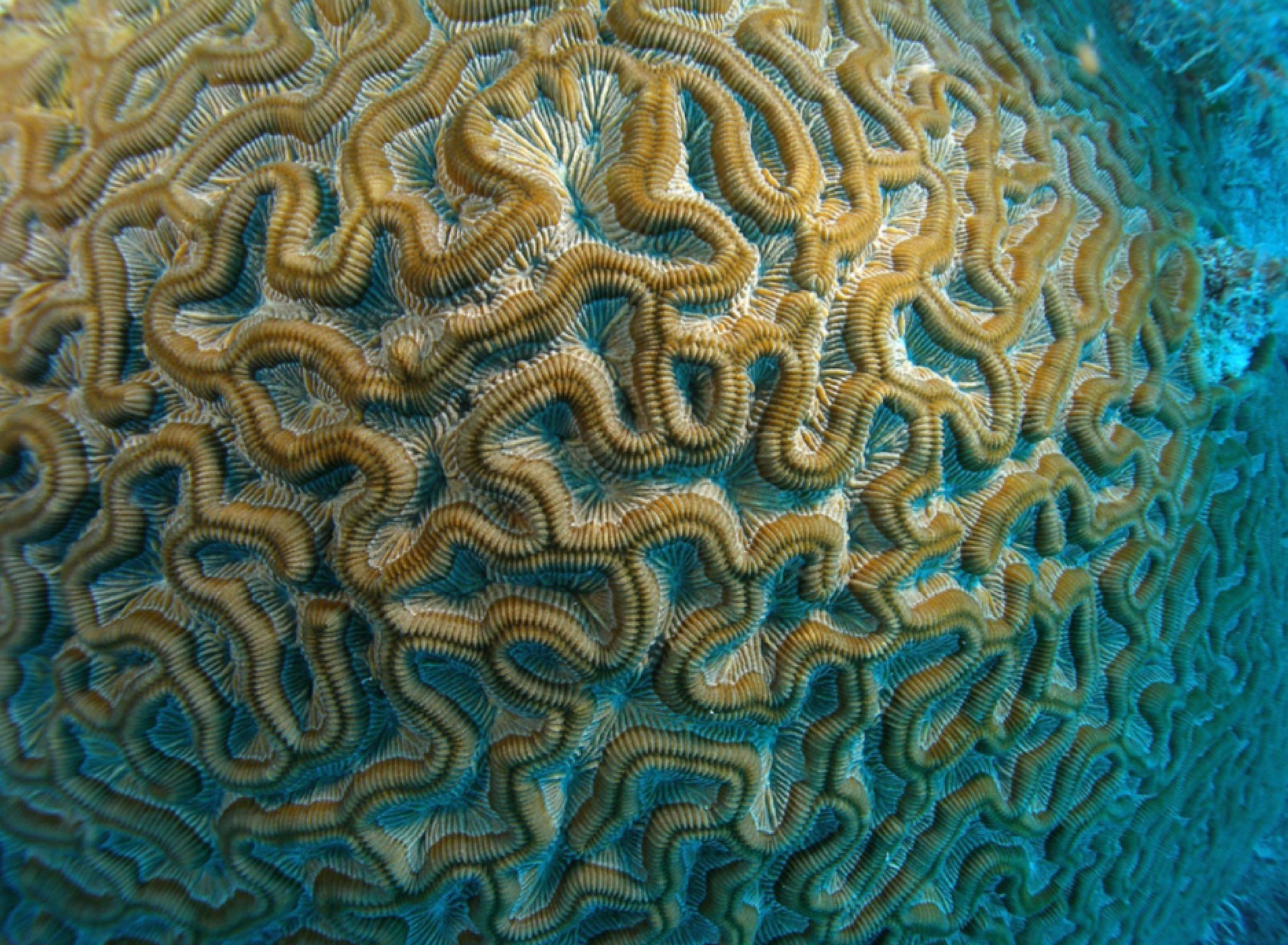 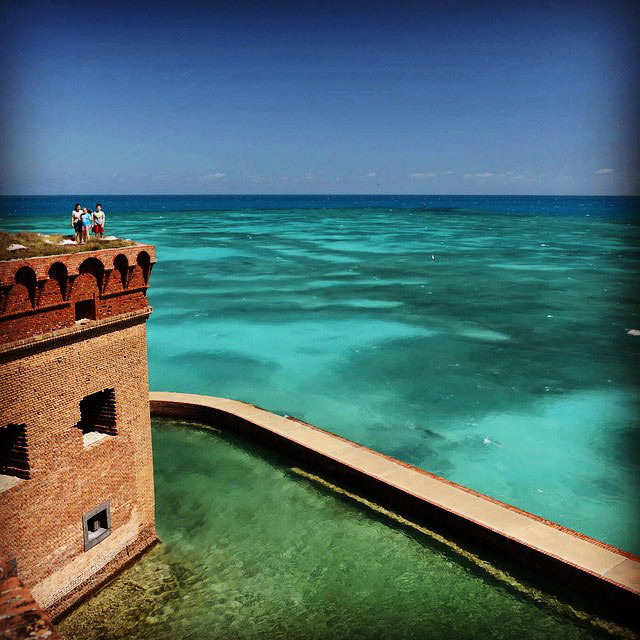