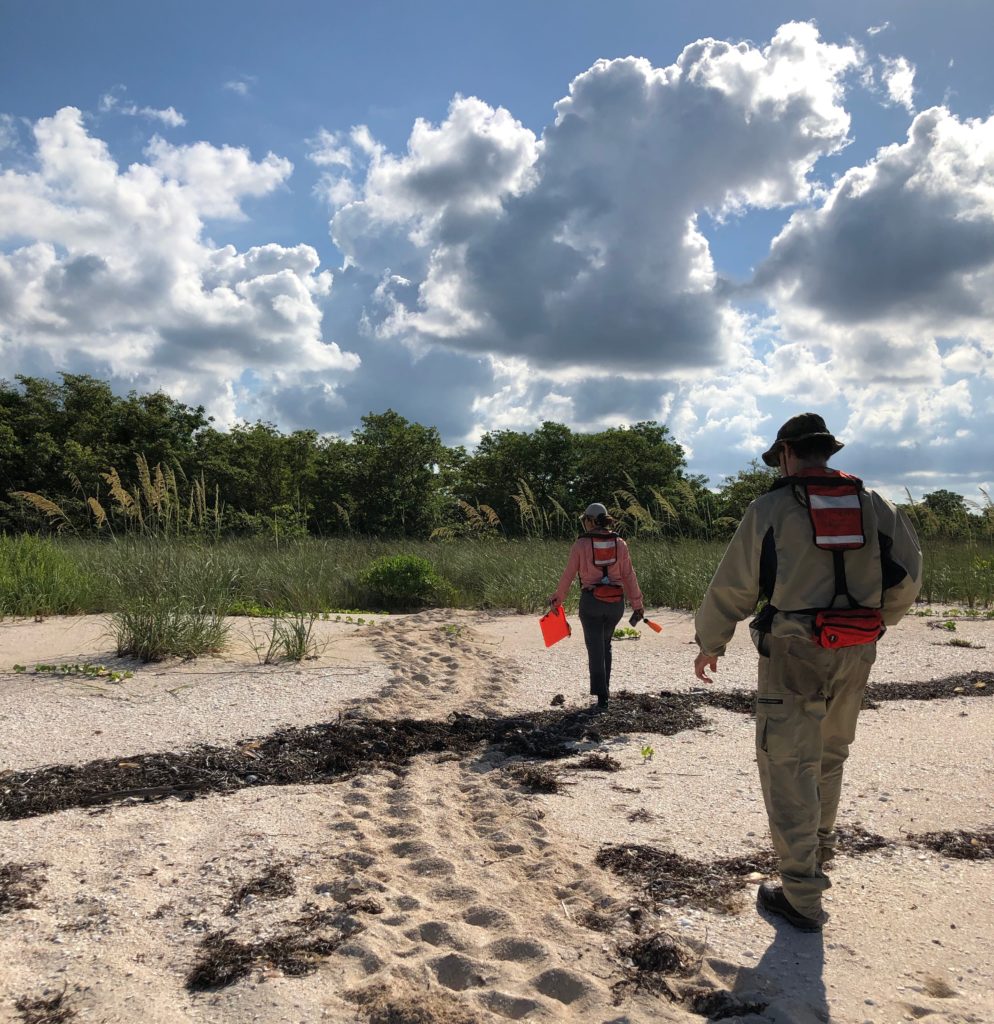 July 2019 – Everglades National Park Intern Grace Hevey is tracking sea turtles in the park this summer as part of the BioCorps Internship Program supported by the South Florida National Parks Trust. SFNPT Intern Allison Hellier joined Hevey on a recent outing to Cape Sable to get a first-hand look at the program. Here’s her report:

The alarm on my phone went off at 4 a.m. I immediately jolted up, got dressed, made coffee and grabbed my backpack for the day.

As I stepped out of my house and into the dark fogginess of the early morning, my day was just getting started. I drove for about an hour, listening to music, going down the turnpike, past street lights, and through long, seemingly never-ending roads until I made it to the bright pink building nestled in the vast green wilderness of Everglades National Park.

I met up with Jason Osborne, a biological science technician and the project lead for the day. He checked the weather, the tides and his emails. We then headed out for another hour-long drive in Osborne’s white dodge truck. Our next stop: Flamingo.

When we got to Flamingo, the sun was just starting to rise on Florida Bay. Osborne and I pulled up in the truck to find Grace Hevey setting up the boat. I put on the two-sizes-too-big bug jacket Osborne had given me over my long sleeve shirt and leggings. The khaki-colored jacket had a mesh front that I could zip to the back hood for optimal mosquito protection. I cinched the jacket as tight as I could on my hips. Today was not the day I was going to let the bugs win in our unspoken battle.

After Osborne went over safety precautions, we were ready to experience one of nature’s most amazing wonders – nesting sea turtles.

Osborne helps oversee the BioCorps Internship Program in Everglades National Park. The program gives young science graduates an opportunity to gain field experience while working alongside park scientists. Hevey is an intern with the 2019 program. I was lucky enough to be there for a day.

We left Flamingo on a small boat and headed out onto Florida Bay. The sun was now beaming, the light beautifully reflecting off the blue water. The waves were smooth and the wind was crisp as we rode out to Cape Sable. From there we got as close to the beach as we could by boat and slowly drove parallel to it, on the hunt for turtle tracks.

Osborne and Hevey looked for any signs of sea turtle crawls or nests, such as comma-shaped tracks and unique looking mounds of sand.

It felt like an episode of Law and Order watching the two of them work together. They were like detectives — getting into the mind of a turtle. Osborne and Hevey would go back and forth: figuring out where the turtles crawled, where they dug their nests, why they would move in a certain way, what their fins looked like and what made them decide to nest or not nest in an area.

Throughout the course of the day, Hevey and Osborne found multiple false crawls, one nest and in one case a note in the sand left by the U.S. Geological Survey (USGS) that simply said “CRAWL.”

The sea turtle nesting surveying process is like second nature to them. There is a natural fluidity and rhythm to their day. They chat, point out crocodiles, share food and talk about their families.

Osborne said that Hevey, a Vermont native who previously studied birds, is a quick learner. The BioCorps Program allows Hevey to work in a collaborative way that connects her with new wildlife, people and experiences.

As we headed back from Cape Sable on the boat, I checked the time and couldn’t believe how fast it had gone. Arriving back at Flamingo, we cleaned the boat alongside the company of three manatees in the water nearby.

Saying goodbye to my new aquatic friends, Osborne and I started the drive back. Osborne made two stops along the way, dropping off his homemade banana muffins to his co-workers and showing me the rooms where BioCorps interns live during their internships.

Sweatier, stickier, sandier and with more bug bites, I left the Everglades with a resounding joy for what I just experienced. As I made the long drive back, I reflected on the unforgettable day I just had. I am still in awe of the grace, sincerity, curiosity, grit and selflessness that the Everglades staff puts into their work.

I would like to now consider myself a (self-proclaimed) early-rising, mosquito-fighting turtle detective thanks to the wonderful guidance of Osborne and Hevey. I’m looking forward to my next drive down to the Everglades. So until my next adventure, I’ll stick to writing.

Thank you again to Jason Osborne, Grace Hevey and the Trust for allowing me to witness what can happen when we give the scientists of tomorrow the opportunity to channel their passions into their work and make real, tangible change in our national parks.