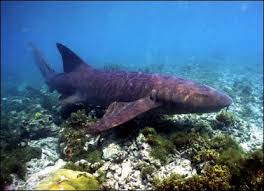 June 2019 – Researchers are headed back to Dry Tortugas National Park this month to study nurse sharks during mating season in the park. Scientists have been tagging and tracking nurse sharks in the clear, shallow waters of the park for more than 27 years. SFNPT Intern Allison Hellier recently listened to a presentation on the project by Dr. Wes Pratt. Here’s her report:

Researchers Find a “Rare Window” into the Mysterious World of Sharks

Birds do it, bees do it, even sharks in Dry Tortugas National Park do it.

That was the main topic of discussion earlier this month when Wes Pratt, Theo Pratt and Nick Whitney shared their research on shark mating in Dry Tortugas National Park.

While Dr. Wes Pratt was the main presenter, the research has been a collaborative effort. The three marine biologists have been studying nurse sharks in the Dry Tortugas for over 27 years. This year’s effort is being funded in part by the South Florida National Parks Trust.

The goal of the work is to understand the mating behavior of nurse sharks, and as a result better understand the population ecology of Dry Tortugas, Dr. Pratt explained. He added that the research has given the trio a rare window into the mysterious world of sharks.

The research is not only interesting, but also vital to our ecosystem. These sharks are a part of a fragile ecosystem that is vulnerable to overfishing and environmental damage.

While millions of sharks are killed each year, breeding females only produce a small number of young, so ensuring that these sharks mate and understanding how this happens are key reasons for the research being done by Pratt in the Dry Tortugas.

The clear, shallow waters off the most remote island group in the Florida Keys not only provide an ideal setting for nurse sharks to mate, but also allows for easy access to research these sharks from birth through adult reproduction.

The Pratts and Dr. Whitney tag the nurse sharks using electronic and traditional methods to collect data for their research. Dr. Pratt said they have been able to tag 268 sharks over the past 27 years. Of the 268 sharks, 77 have been re-sighted or recaptured.

The mating season starts in June when the females make their way into the shallows of Long Key and head up and down the coast to cool down and rest. While the females are taking their time, Dr. Pratt said the male nurse sharks zip around on the hunt for females.

The females idle in the shallow water until the right male approaches. The females are pickier due to the fact that they can produce a limited amount of offspring (unlike the males).

Once the females find the right mate, the male initiates by grabbing onto her pectoral fin. The two lovebirds engage in a wrestling match that in turn leads to mating.

The female nurse sharks are true homebodies. After mating, the males go up the coast to the Tampa Bay area, while the (now pregnant) females stay in the Dry Tortugas until August.

Dr. Pratt defines the nurse sharks as “partial migrators with extreme breeding site fidelity” due to this behavior.

Dr. Pratt said the research not only helps them understand the nurse sharks of Dry Tortugas, but translates into a more universal understanding of sharks and their mating habits.

Looking to the future, Dr. Pratt said they are expanding their research into nurse shark migration, food habits, reproduction and growth.

While there are still questions Dr. Pratt hopes to answer in his research, one thing is for certain: size matters. “The sharks keep getting bigger and bigger, and I don’t,” Dr. Pratt said.