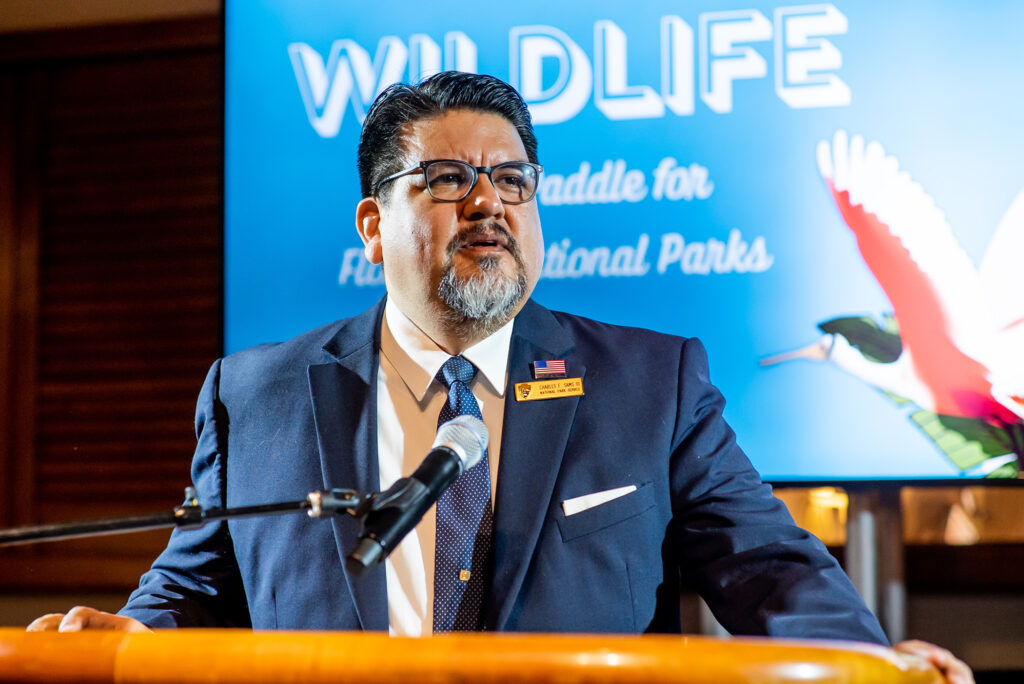 In total, Wine & Wildlife grossed $152,000 in support of Florida’s national parks – almost a 28% increase over the event’s previous record – with $61,000 of that money raised being committed to the Swamp Water and Me Program (SWAMP) at Big Cypress National Preserve. Through this youth environmental education program, every 6th-grade student in Collier County visits Big Cypress National Preserve and becomes a scientist for a day, totaling about 3,000 students served each year.

The money raised from this event allows us to continue to support an array of programs and projects throughout the four National Park Service units located throughout South Florida, guided by five key pillars: environmental education, exploration, preservation & protection, restoration, and community engagement.

Guests were a part of history as renowned conservation and wildlife photographer Carlton Ward Jr. was bestowed with the inaugural “Clyde Butcher A Better Florida Award.” The award was created after Mr. Butcher himself received The Alliance for Florida’s National Parks’ Lifetime Achievement Award in 2020. This new award was created in his name to signify the lasting impact his work has on uplifting the beauty and the brutish of our homeland by honoring other artists that also champion to keep Florida natural, wild, and accessible.

The award was personally presented by Clyde and Niki Butcher, along with their daughter, Jackie Butcher Obendorf. Mr. Ward remarked that Mr. Butcher was a “true Florida hero” and that he was “motivated by this [award] to keep charging forward with these stories” of conservation.

Chuck Sams, who was recently sworn in as the 19th Director of the National Park Service, was one of this year’s Wine & Wildlife keynote speakers. He is the first Tribal citizen to lead the agency and the first Senate confirmed leader in nearly five years.

In his speech, Director Sams remarked: “We are especially proud of the education programming here in South Florida. Creating future park stewards by engaging our local youth is paramount to the future of our national parks. The Alliance has helped create future park stewards at all four parks for 45,000 students in 2021 by bringing students to the parks and virtually bringing the parks to the classroom.”

Fran Mainella, the 16th Director of the National Park Service, and Pedro Ramos, Superintendent of Everglades and Dry Tortugas National Parks, also took the stage that evening. Rangers from Big Cypress National Preserve and Everglades National Park hosted exhibits that highlight some of the largest and most necessary programs within their respective units, including youth environmental education, invasive species management, prescribed fires, and hydrology.

Stacey Deffenbaugh of NBC2 News served as mistress of ceremonies.

Three Ways to Explore the Florida Outdoors The New Year
Where Have All the Big Cypress Gone?