In a year when so many things still felt uncertain, we are proud to say that 2021 was a winning one for our organization.

We began the year planning one of the biggest announcements from our organization ever – that we would be introducing ourselves under a new name. We said good-bye to the South Florida National Parks Trust this past Spring and you astoundingly welcomed us as The Alliance for Florida’s National Parks. One of the main reasons for this change was that we wanted to be represented by a name that was more inclusive, that genuinely invoked allyship and, so far, it has proven to be working.

You – our supporters – have championed The Alliance in record numbers this year and it’s because of you that we had many successful firsts and “greatest evers.” An awe-inspiring 270 swamp walkers attended our Swamp Celebration at Clyde Butcher’s Big Cypress Gallery, helping to raise $38,000. This was both the greatest number of guests to ever join us and the most money raised of all time from this event. More than 220 donors rallied on Give Miami Day to raise more than $50,000, the greatest amount we’ve garnered on this special day of giving. We hosted our very first virtual cocktail party in April and more than 130 supporters toasted to keeping Florida natural, wild, and accessible through their screens.

While these are monumental milestones for our organization, they mean even more to Florida’s national parks. This past year, we funded nearly 20 programs throughout Everglades, Biscayne, and Dry Tortugas National Parks, as well as Big Cypress National Preserve. Every time you attended one of our events, made a donation, or simply shared a post on social media, you helped these results come life:

In the New Year, we will continue to support our most beloved legacy programs and we’ll be incorporating some new and exciting projects, as well as preparing for the 75th anniversary of Everglades National Park and the re-opening of the Flamingo visitor facilities at the southern tip of the park.

We’re making positive waves of change throughout South Florida and we are honored to have you along for the ride. Because when The Alliance wins, all of Florida wins together. 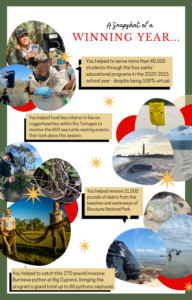